Only George Carlin Would Have the Appropriate Words for This 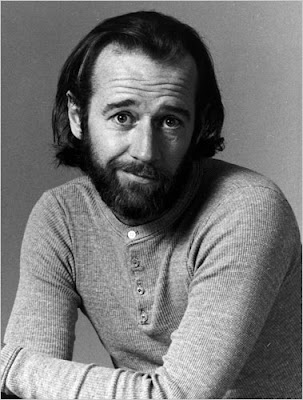 I'm always relieved when someone is delivering a eulogy and I realize I'm listening to it. -- George Carlin, 1937-2008

When Bobby Fischer had yet to completely flip his lid and was taking Boris Spassky to the woodshed in Reykjavik, my friend Tommy D'Agostino and I were playing a 24-game chess championship for Herschell Street in the Bronx. Tommy was two years younger than me, but already savvy beyond his years, because early on he realized that all he had to do to defeat me was to utter the first few words of one of George Carlin's standup routines. "I was fired from the Frontier Hotel in Las Vegas..." he would start, innocently, and before I had finished side one of FM and AM, he would have taken my queen, a rook, and two knights without losing so much as a pawn.

I once described Carlin as my philosopher saint, and I believe that's still as apt a description of his influence on my life as can be assessed. For whatever reason, Carlin's defiance of authority, his love of inappropriate juxtaposition, and his joy at the meaning of and reaction to words clicked with me. It wasn't just because he was saying rude things that Carlin's sense of language made sense to me. It was because he so often zeroed in on exactly how people use language to divide and affront others. He once proposed replacing the word "kill" with the deadliest of the seven deadly words that couldn't be said on television. Those who could not stretch their brains only got offended; they missed wholly that Carlin's point is that it's not words that are the problem, but the emotion behind them. Penn Jellette's Showtime series, Bullshit, interviewed a woman who refused to use any of those seven deadly words, but who had no problem using a different deity's name to take in vain, and didn't understand why "fiddlesticks" wasn't much different than the banned-in-mixed-company-and-by-the-FCC four-letter word beginning with the letter f.

Carlin also zoomed in on hypocrisy. In the 1970s, he made fun of the U.S. strategy of exiting Vietnam "through Laos, Cambodia, and Thailand." He chided the conviction of Muhammad Ali. Ali, he said made money by beating people up, but wouldn't kill them; the government, he then observed, said that if Ali wouldn't kill people, it wouldn't let him beat them up.

In later years, I found myself finding some of his bits less appealing than others. Those bits of his (and any comedian's) concentrating on scatology tended to bore me. But he also refined his wordplay, and those later bits about words were simply amazing.

Many of the reports of his death today mentioned that he was the first host of Saturday Night Live (and also mentioned that he was looped on cocaine). Maybe one of the good things about Carlin's death is that it will finally make NBC realize that SNL has been a television zombie for too many years. (I think Carlin would have gotten that; he also would have said it funnier.)

I am the proud possessor of a set of George Carlin-autographed LPs. It disturbs me that many younger people will file Carlin in that time in history where the spoken word was primarily distributed on vinyl. But we have his books and his CDs and his tapes and his DVDs and his website , and, I'd also imagine, hundreds of thousands of folks like me who carry a little bit of Carlin's brain, his attitude, and his pessimism around every day.