...and I don't have time to discuss it in detail right now. So read, and we'll discuss later. 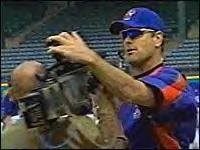 Rogers is one of only 17 pitchers in the 124-year history of professional baseball to throw a perfect game. But he was a perfect butthole yesterday.

The Texas Rangers and Major League Baseball are discussing a suspension, which, the way the majors work, will be for three games. I am pleased to learn that at least one of the cameramen is pursuing assault charges. I hope the local police authorities act on his request and arrest Rogers.

Sports figures should be treated no differently than you and me. I can't be sure about you, but I have a hunch that if you walked into my workplace to sell me some advertising or office supplies, and I began to throw your presentation around and push you into the wall, you wouldn't ask my employer to suspend me for three days. You'd want to press charges.

I also don't have much affection for the "heat of competition" argument. Heck, in this case it's completely invalid, since Rogers wasn't to pitch that night and the alleged assaults took place before a game. If you're keyed up to perform, you should be keyed up to swing a bat or shoot a basket, not to punch somebody out. The only sport (and it's a sport I dislike) whose participants should start hitting people when stoked to perform... is boxing.

The irony is, Kenny Rogers is probably still upset at losing a playoff series for the New York Mets in the late 1990s. In an extra-inning game, he'd come on in relief, but didn't have enough faith in his best pitch to throw it when his catcher called for it. He went with his second-best, and the Mets got beat. I thought he failed his gut check that day... now I'm sure that he's missing something essential.
Posted by Mike at Thursday, June 30, 2005 No comments: Links to this post

WILL GOD SMITE THE RED STATES?

WILL GOD SMITE THE RED STATES?

It's a common belief that California is the earthquake capital of the United States, and I'm sure there are those among us -- well, if "us" means the entire population of the United States -- who believe that those godless heathens deserve what they get when the earth moves.

But think about this: One of the biggest earthquakes waiting to happen here in the US is going to happen when the New Madrid fault (in Missouri) lets loose. It's happened before. In 1811 and 1812, three earthquakes, each of at least 7.8 on the Richter scale, not only rattled Missouri, but caused damage as far away as Charleston, SC and rattled Boston, MA. According to seismologists, the odds of an earthquake of 8.0 magnitude occurring on the New Madrid fault in the next 50 years is at least 7 percent. If you look at the map of the damage felt after its 1895 shake, you'll notice that pretty much all the damage occurred in "red" states.

I wonder what those devout believers will think of such an act of God. Most likely they'll blame liberals, homosexuals, Hillary Clinton, and high taxes. And I personally wouldn't think that the damage would be caused by a vengeful God. Why would God wipe out Branson, MO?

But it is interesting that so many ultrarighteous folks are living in an area that is going to get seismologically whupped eventually.

Add to that the supervolcano hidden beneath Yellowstone Park, which, when it explodes, will take about one-third of the United States with it, and I now know why I get the heebie jeebies when I'm in the flyover states.
Posted by Mike at Tuesday, June 28, 2005 No comments: Links to this post

Well, I kind of always picture Yosemite Sam whenever I think of these australopithecine idjits from the South, anyway...

What is with people in this country? Do we have difficulty with abstract concepts? Do we have to actually leave our homes to believe the weather report?

Judging by the number of people who believe that no human has walked on the moon or that burning the American flag requires legal proscription (perhaps even Constitutional direction against), I think we do.

Today, the Republican-dominated House of Representatives was at it again, passing a bill that would make flag-burning a crime. I'd say that some of these folks ought to be shot, except that they probably can't distinguish between sarcasm and actual threat, and in these Patriot Act days, I'm sure that someone down there at the FBI would take it upon himself to start interviewing my neighbors.

Let me type this s-l-o-w-l-y for the folks who are missing the crux of this problem. Burning a flag is an exercise in really offensive, but thank-goodness-the-founding-fathers-included=-it-in-the-Bill-of-Rights, First-Amendment-protected free speech. The only reason to burn a flag (and not "the" flag... explanation follows) is to make your political opponent angry. That's the whole point of protecting free speech. If you don't protect free speech, anything you say that makes the party in power unhappy can result in random acts of political imprisonment or harassment. (Cf. Richard Nixon's enemies list and the use he intended to make of the IRS and the FBI.) I have every right to call our president a reactionary, illiterate, inbred, nepotistic doofus. I have every right to burn his photograph. And it should go without saying that I have the right to burn the flag.

Is that inflammatory? Oh yes (and heck, let's intend the pun, too). It's just less effective if you burn a piece of paper that says "USA." Even effigies come up short. But burn that flag, boy, and you've got peoples' attention -- and about 100 million new enemies.

Would I run out and burn a flag? No. I don't hate my country enough to do so, nor do I find it the most effective way to make a statement. But I say, if the guy down the block wants to walk downtown in front of the Federal Building, where all those security guards have all those guns, and burn a flag, have at it.

By the way, just because I'm opposed to outlawing the burning of flags in the abstract, I have no problem with outlawing burning specific flags. For instance, the flag displayed at the Smithsonian that made it through the British assault on Fort McHenry. If anyone ever maliciously damaged that flag, I'd be first in line to whack the offender, because that particular flag has historical meaning. The flag that was raised at Iwo Jima also deserves special protection. But a $1.99 flag I bought at Woolworth's (which was probably made in China, anyway) is no more to be protected than the Darth Vader action figure that came with my McDonald's happy meal.

This Supreme Court is problematical; I still think you can't limit free speech in this way. But I have a compromise solution that would stymie the protests that Republican legislators seem to detest without outlawing the specific act. Congress merely needs to require that all flags sold in the United States be manufactured out of flame-proof (or at least flame-retardant) materials. Then all a protestor could do would be to try to burn one.

Where's Ben Franklin when we need him?

HEY, VERN! WHAT'S THIS CHAINSAW FOR?

HEY, VERN! WHAT'S THIS CHAINSAW FOR?

I don't know. If you were a US guard at the border, would you let a guy with red stuff on his chainsaw come into the US? That's what happened, and the result was that the fellow bringing the chainsaw and knife into Maine killed a guy he'd threatened.

And yet... the guy had no arrest warrants. If it were me, and I were going to help a guy clear his land, I'd be pissed if I were held at the border, or had my chainsaw confiscated.

So, amazingly, the guard did the right thing.

The bigger problem was that there was a Canadian warrant for this guy that the US didn't know about. That would have been a reason to hold the guy, or at least confiscate his sharp tools. I also have to wonder whether having weird stuff on your chainsaw isn't suspicious enough to generate a warrant, and I wonder why the border guard didn't do that.

The problem we have is that in today's world, as has been the case for years, if someone wants to commit a brutal crime, in any magnitude, it's difficult to prevent. That means that the only true solution for security isn't more weapons and hatred, but growing people who instinctively do the peaceful thing and who haven't been trained to hate or distrust. It sounds simple, but it isn't, is it?

Posted by Mike at Wednesday, June 08, 2005 No comments: Links to this post

Now that he lost the election, John Kerry has finally released the transcript from his Yale years. Turns out he got more Ds than George W. Bush (4-1), and Bush seemed to have slightly better grades... including solid grades in anthropology, history, and philosophy. Overall, Bush had a 77 average, Kerry a 76 (both basically C average... although, it should be pointed out, C average at an Ivy League university).

What's to be gleaned from this? That college success may not be indicative of future performance? That the old adage about C students is true? Or that Bush had more money to bribe his professors with than Kerry? Who knows the truth (other than their old professors and fellow students)?

But this gets me to thinking. Instead of dropping hundreds of millions of dollars in campaign expenses, perhaps the best thing we can do is devise some sort of test to give those who are interested in the presidency. Part-IQ test, part relevant knowledge test, part psychological profile. Even if we still go ahead with the actual campaign and election, just requiring the candidates to complete this battery of tests would be instructive.

And as I think further, let's not limit the tests to standard stuff. Let's find out how the candidates perform on, say, those tests they run in Cosmopolitan all the time. Wouldn't it be instructive to learn which candidate preferred cuddling after sex? Maybe the folks at Quizilla can help us learn which of the Seven Dwarfs the candidates most resemble. Maybe a round of Jeopardy could be required, or even better, how about a turn on the Comedy Channel game show, Distraction? I'd pay to see any presidential candidate with six dozen clothespins attached to his face, wouldn't you?

And should we limit it to written tests? How about putting these pols through one of those Survivor-style challenges? Run them through some nets, make them grab a flag from the bottom of a lagoon, then have them assemble a puzzle. Maybe then they could face Barry Bonds off at a Home Run Derby, or do one of those ESPN football challenges.

I have to admit, though, it scares me to think that a C student is running the country, and that my only other realistic choice last time was another C student from the same smug-guy camp.

Then again, what do I know? My own B+ average at a non-Ivy League School has done me so well.

SEINFELD MUST BE PLEASED...!

SEINFELD MUST BE PLEASED...!

It's probably not even a sequel.

YOU KNOW WHAT REALLY IRRITATES ME?

YOU KNOW WHAT REALLY IRRITATES ME?

Ooops, wait, sorry there. I seem to be channeling George W. Bush this morning.